Yesterday was a fine, fine day. The weather was sunny and just warm, not hot. We had wind, of course, but it was the kind of breeze that would have been good for flying kites, if we'd chosen to fly kites. Days like that make everything in life look sunny.

I decided it was a day to take a few pictures of outside goings-on before settling in to wash dishes and start supper.

What was going on? Well, it seems a warm day is a day for bees.

I know it seems like lots of honey would be a good thing, but we suspect something is wrong with that hive because there are few bees. The queen is still alive, but there is little brood. I'm guessing something happened earlier in winter to make fewer bees since there is so much honey remaining. The other hive seemed to be doing well, so that's good.
After visiting the bees, I walked toward the backyard to see what the chickens were up to.  To nobody's surprise, they were scratching about in the leaves, and Chester the Rooster kept his evil eye on me.
Chickens weren't the only thing I found in the leaves on the edge of the trees.
And, yes, according to the dictionary, "crocus" is the plural of "crocus." The dictionary also says it would be correct for me to type "croci," but that would just make it more awkward, I think. I've always said "crocuses," but I learned today that I've been wrong all these years. I will probably continue saying the word incorrectly because I like it better. I guess a lovely spring day brings out the rebel in me.

It's Not All About Me

Sometimes I like to highlight people in my life (or people I don't actually know) who are doing things I think are cool, amazing, or interesting. Today is one of those times. (Note that I have highlighted some of these folks before, but if they continue to do things that impress me, why not?)

1.  Creative juices are flowing for my daughter. She has been writing, creating games, crocheting, and sewing of late. This morning she created a blog post about a recent creation.

2.  I've post before about our first-time beekeeping experiences. My beekeeping son has really put some effort into his endeavors. He's created a YouTube channel, Baroque Beekeeping, to post videos of his bees and to document what he doing and learning. (This is not a homeschool assignment.) I particularly enjoy how he's merged his love of classical (and baroque) music with his love of bees. If you want to try out his videos, choose one of the more recent ones; the quality is better. There's something to be said for experience.
3.  My brother-in-law knits, crochets, and paints. Other people in the family do other crafty things. Last week they created an Etsy shop, Bakerz Dozen Creations, to sell their goods. (This last year wasn't good for the craft fairs they normally frequent.) They don't have everything in the shop the way they want it yet, but if you have a request, they probably can meet it-- especially if you are into amigurumi (that's his expertise).
4. I have two more friends' Etsy shops that I want to share. The first is from a virtual friend, Karen, who I "met" on The Frugal Girl. I love Karen's ability to repurpose and make beautiful, classy, and useful items. Her shop is called Fabric Speaks. (I really love repurposing!)
The second shop also brings to life old things in a different way. I hadn't expected I would enjoy buying, learning about, and selling vintage items so much, but it is another way of repurposing, don't you think?Anyway, my friend in real life, Ann, finds the coolest vintage items and sells them at Annie's Vintage Nook. She takes clean photographs of her items, and I've noticed she has excellent reviews, especially with regards to packing her items carefully. I'm so excited Ann is doing this because she has an eye for beautiful things. (She is artistic and crafty, too, but, to my  knowledge, she only sells her creations at craft fairs.)
And that's all for now, folks!
Posted by Jody at 8:30 AM No comments:

It seems I am destined to be behind. That's okay. This birthday party was delayed by a couple of weeks anyway because of sickness. 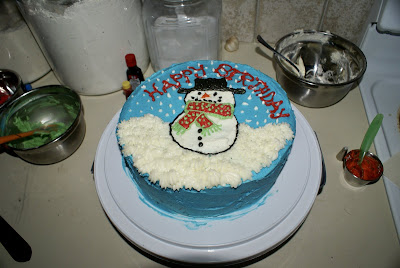 This was a fun and easy cake to make. I loved the colors, and it tasted good with some coconut extract in the chocolate cake.

Child: Mommy has a moustache!

Children are so brutally honest, aren't they?

This morning the inside temperature was 65F, and it was absolutely no problem. After church we decided to visit my father and cook supper for him. My husband and I knew we would be coming home to a very cold house since the dryer wouldn't be running, the oven wouldn't be cooking, and the 9 living bodies wouldn't be maintaining a few spots of heat in the house for the entire day. So, we made the decision to name today, November 1, the official Heat Day of 2020. We turned the heat on as we scurried about to fill water bottles and as we reminded everybody to visit the little girls'/boys' room.

I don't feel shame, especially since we were driving through blowing snow on the way home. Snow outside equals heat inside, right?

BUT there could have been an interesting turn of events in the game; we discussed during the drive home that the wind was blowing so hard that perhaps our electricity had gone out. Now, as long-time readers know,  I occasionally change the rules of this heat game on a whim. My husband and I reasoned that if the electricity had indeed gone out, then we technically wouldn't have benefitted at all from the heat being turned on. SO, if the electricity was out, today wouldn't actually be Heat Day since we would still be shivering in the cold until the power was back; Heat Day could have been delayed a whole day (or even two).

But we had lights and heat and very tired children when we got home. The game is over, and we made it to November! Yay!

We woke to these chilly temps, but the heat is still not on! Will we make it to November with no heat? We will try! That means biscuits in a hot oven for breakfast, heating up leftover beans in the oven for lunch, and something piping hot for supper, too! One son has volunteered to make granola today, and that takes a long time in the oven. Warmer clothes are out of storage for everybody, so we can bundle up a bit, if necessary.

I think our chances are good of getting at least to midnight tonight before turning on the heat. Still not going to make a record (November 23rd is my record), but I count anything in November as decent.

Fall is here, and we've recently wrapped up our family's birthday season. As always, I like to post pictures of my homemade cakes (and sometimes not cakes) to encourage folks who don't have the time/talent/money to make each birthday "pinterest-perfect."

First up is a Zoey Zebra cake. The 5-year-old requested a zebra ice cream cake. 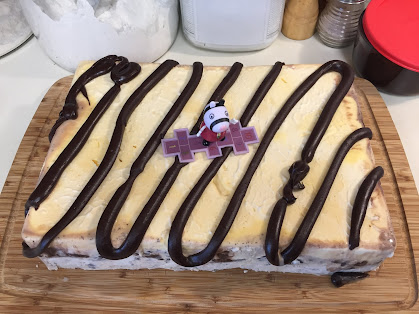 Zebra toy + ice cream + fudge stripe = Zebra ice cream cake
All I had to do was melt ice cream a little bit and smoosh it into the lid of a cake carrier. Then I crumbled up off-brand chocolate sandwich cookies and threw them on the ice cream and drizzled some homemade fudge topping. Last I added another layer of very soft ice cream. I covered the whole thing and put it in the freezer. Just before cake time, I flopped the cake out onto a cutting board and put on zebra stripes (cold hot fudge sauce in a zip plastic bag with the corner cut off). The toy doubled as one of the birthday presents.

The next cake wasn't a cake at all. The new teenager requested skillet cookies. I decorated the top with the rest of the fudge sauce. 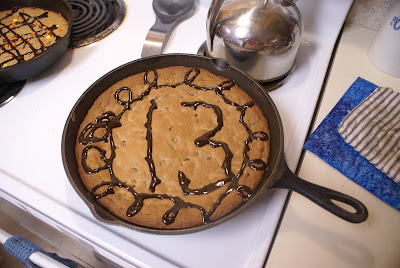 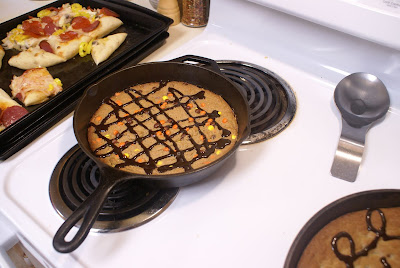 The next birthday boy wasn't really sure what he wanted, but he didn't want a decorated cake. He was more interested in flavors. So I suggested a spice cake and a carrot cake. 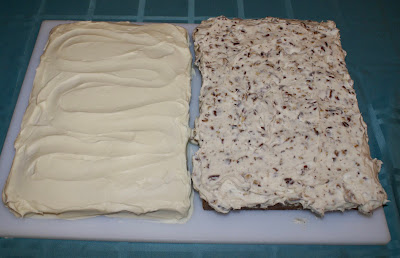 The cake on the left is a spice cake with a maple cream cheese frosting, and the cake on the right was Grandma's carrot cake recipe. Those are toasted pecans in that cream frosting, and, yes, they WERE tasty.
And last, and certainly the sweetest, was a repeat request. My youngest son wanted another construction cake with a toy on top and candy. I'm not sure this was actually a construction toy, but he liked it. And it was so easy; I frosted the cake with chocolate frosting, dumped a bunch of candy on top, and placed the toy. 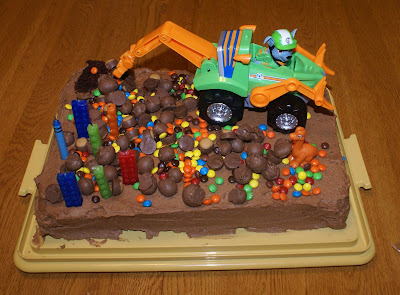 But there was a problem. The birthday boy took a bite and declared it too sweet. The poor child didn't even eat his own cake. To tell the truth, he wasn't the only one who couldn't eat it because it was too sweet. I felt horrible, and I learned a lesson.
And that wraps up the Fall Birthday Season of 2020.

***If you are a regular reader, you might be curious about how my heat game is going this year. So far, no heat! However, I am not optimistic that we'll last the entire week. Today was chilly and damp, but I countered nature's move by baking a pumpkin, dressing the beds with flannel sheets, and digging out the warmer pajamas.
In a strange turn of events, my 15-year-old is attempting to sabotage my game by purposefully leaving the front door open. I countered his move by threatening a grounding from all electronics for the rest of his life. We'll see what happens tomorrow.
(Is anybody else playing along with my insane game?)