Whenever one of my children comes to me with a loose tooth, I wiggle it this way and that, try to twist it some, and give it a weak experimental tug. Almost always I send the boy on his way, telling him to keep wiggling it and hoping it comes out on its own because, quite frankly, I’m not good at pulling teeth.

But my Grandaddy was.

Once when I was at Grandma and Grandaddy’s farm, I was fussing with a loose tooth, probably whining and too scared to pull it out.

“Come on over here and let me look at it,” Grandaddy offered.

Now I knew his reputation for being a good tooth-puller, but I didn’t care. “No, I don’t want you to pull it. It’s not ready!”

I was skeptical and, for the first and only time, a little bit scared of Grandaddy. A little jumpy, I stepped closer anyway and opened wide. After a quick, little wiggle, I breathed a sigh of relief.

“See, I told you it wasn’t ready!” said smug me, glad I’d proven I knew a thing or two about such matters.

Except I didn’t really know about such matters. Even as the words tumbled over my teeth, they found the hole left by the tooth now held in Grandaddy’s nimble fingers. I hadn’t felt a single thing.

Let me tell you, he pulled more than one of my teeth, and every time, his execution was just as flawless-- quick, painless, and successful. Who knew that a West Virginia farmer’s fingers could be so gentle?

Grandaddy had six children and 13 grandchildren, and I was the youngest. I believe I probably was the last to benefit from his dental expertise, and I never heard of a single botched tooth job on his part from any of my elders. Every story I’ve heard sounds pretty much the same as mine: one second there’s a tooth, and the next it’s gone (no strings or doorknobs involved).

Even when she’s not late because the winter weather froze her wings, the tooth fairy has nothing on my Grandaddy. She has the ordinary job of pickup and delivery. The real magic rested in the hands of an ordinary farmer with a knack for pulling teeth.

When I was a kid and had an empty space in my smile, I loved drinking things through a straw because it fit perfectly in the hole left by the lost tooth. Kid or no, sipping this copycat drink through a straw is a pleasure!

Motherhood is not what I expected it to be. I’d seen my sisters cuddle their babies, chase after their toddlers, and chauffeur their teenagers. I’d read pregnancy and parenting books. But nothing could prepare me for the life-change of being Mommy.

For starters, I never expected motherhood to be so noisy. My kids are loud. My boys makes all sorts of noises and cause all kinds of ruckus, but the girls scream. Loud and long and frequent are their screams. Sometimes the boys cause the screams, but just as often it seems they do it just because. One of them recently started having night terrors, waking us several times a night with unsettling screams that stop just as abruptly as they start. I never expected a child could do this without ever waking up.

I didn’t expect to be as stupid as I am now as a mother. For all that I value the peace that comes after bedtime, I risk it all for a photo opportunity. If my children look particularly angelic in bed or I find them hugging a book they fell asleep with or if they’ve conked out under a clothes basket or on
top of one, I can’t help breaking out the bright flash that can wake the living dead. 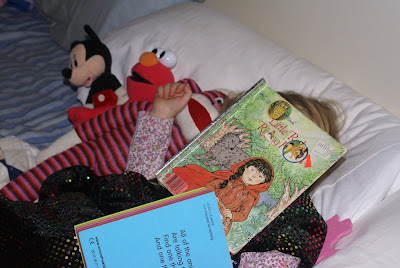 I never thought I’d say the ridiculous things I say now. “No, we don’t put meat between our toes.”  “Please, let’s not drink the ketchup.”  “Turn the light on so your brother can go back in time.” “No. We don’t kiss toilets.” Never would I have imagined that these actual words would come out of my mouth.

I hadn’t the notion before children that I could handle so many nights of so little sleep, sometimes because three children all have bad dreams on the same night, leaving me tottering on the edge of our bed. I never thought I could handle being covered in vomit with such grace. Before children I don’t think I was tough enough to deal with a toddler stabbed in the chest by a sharp fork while leaning over the open dishwasher or with a preschooler shoving a pebble so far up her nose that she couldn’t
dig it out again.

Not one single book or magazine prepared me for being so excited about “happenings” in the potty or my boys’ blossoming (good) taste in music. I had no idea I’d be the recipient of so many dandelions and busted up acorns. I didn’t expect to have to come up with excuses for the tooth fairy not showing up until after breakfast more than once in the same week.

I didn’t expect that for more than a decade I would know not a single instance of boredom. Who knew how thrilling it would be to see my child reading a book for the first time? I had no idea, for better or worse, that my daughter would act so much like me. I never thought I’d feel so undeserving of the love my children give to me.

I never expected motherhood to be one bit like any of this, but I sure am glad it is.

The Mother’s Day tradition in our house is that Mommy and kids bake cookies together. Now that there are seven children, this can be a little hectic, but it is still a tradition worth keeping because this mother loves her cookies. This year’s choice is Molasses Crinkles, the cookies I usually found in Oma’s cookie jar. Happy Mother’s Day!

Cream butter and sugar together, then mix in the egg and molasses. Add combined flour, salt, soda, cinnamon, and ginger and mix well.

Shape dough into balls the size of a walnut and dip the tops into sugar. Place on a lightly greased cookie sheet, sugar side up. Bake at 375 degrees for 12-15 minutes. Cookies are thick, chewy, and have crackled tops.


*This post has been shared with Strangers & Pilgrims for the Art of Home-making Monday.
Posted by Jody at 7:49 AM 5 comments:

What's tall when it's younger and short when it's older?