My 4-year-old daughter loves to play pretend with me. For several months, we've played Cinderella. She is not Cinderella. I'm not either. We're the step-sisters.

Today she changed the game. Bye-bye, glass slipper;  hello, Redcoats. This afternoon we stepped right into our nation's past as she became Sarah from the cartoon series about the American Revolution, Liberty's Kids. I morphed into Sarah's mother.

The entire play was acted out while I was washing dishes and then feeding the baby. And this is the dialogue:

Daughter: I'm Sarah, and you be my mother. And my father just died in the war. And we're so sad, and my hero is the one with my brother who is a soldier, but he got captured by the British and has a gag in his mouth.

Daughter (in an urgent, breathless voice): Mother, what shall we do? The British are coming up the driveway!

Me (matching her urgent, breathless voice): I don't know.  I guess I'll need to keep washing the dishes so they don't see dirty dishes.

Daughter (urgent, breathless voice continues for the duration): How shall I help you?

Me (still the urgent, breathless voice, but also choking back laughter at aforementioned voice): Perhaps you could unload the silverware from the dishwasher, my daughter.

Daughter: Yes, that would be delightful.

Daughter works alongside Me, putting dishes away.
Then, in the background, a baby cries. For real.

Me: Oh, no, your baby brother is crying!  Shall we go to him, daughter?

Daughter: Yes, we shall. You must nurse him before the British get here.

Daughter (handing me a nursing pillow): Here, my mother, you will need this.

Me: Thank you so very much.

Daughter:  The British are almost here. What shall I do?

Me:  Well, if they will be coming in, don't you think you should go pick up your room?

Daughter (giving me a strange look, a look which says that she's figured out my game but still in her breathy, urgent Revolutionary War era voice which indicates playing pretend): I do not think I should. What about the children?

Me: (NOT in breathy voice, but in a genuinely confused one) Huh?

Daughter: The British are coming. What about the children?

Me: If you pick up the toys in your room, then they will not know we have children.

At this point, she completely figured out my game, and Daddy came home or the brothers interrupted or something.

If you have a child that likes to play such things, it is so easy to tune out the constant chatter when you are busy with other thoughts. But play along a time or two, just for the fun of it. Plus you might get a few chores done before your little smarty figures out your ulterior motives. And if playing make-believe is really just not your thing, at least listen to your child play make-believe with siblings or friends. The drama cannot be matched on the big screen.
Posted by Jody at 8:31 AM 2 comments:

This morning when I looked outside, I saw Mr. Robin Red-breast and many of his friends poking about the partially bare earth. I tried to get a good picture, but after I snapped a few poor ones all the birds flew away. Today most of the snow melted. Only the parts in the shade on the north side of the house and the large piles from the plow are left. We are blessed, however, with lots of mud.
Posted by Jody at 10:49 PM No comments:

Email ThisBlogThis!Share to TwitterShare to FacebookShare to Pinterest
Labels: outside 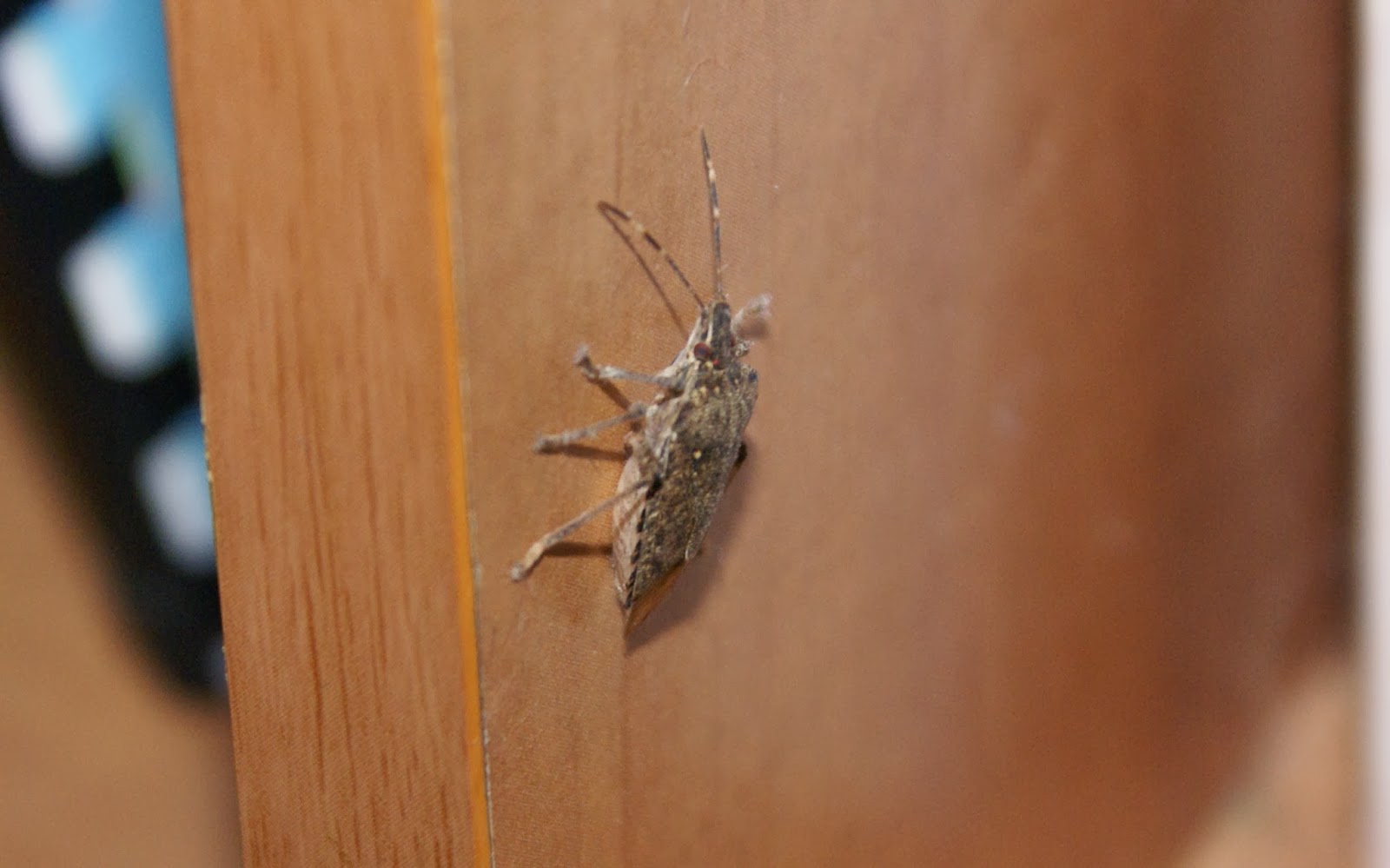 Our first plague of biblical proportions was the ladybug. Actually, it was an asian lady beetle or something. Whatever it was, they say it wasn't a true ladybug. But it looked like it. And when those ladybugs came, they came in a swarm that blocked out the sun. I'm not joking. It wasn't dark as night or anything, but on that sunny autumn afternoon when they came, I was in the kitchen when I noticed it was suddenly much darker outside.  I thought that an unpredicted storm was coming. I went to the door to look out, and I noticed bugs climbing all over the window. But it wasn't just on the outside. They were already making their way indoors.

I called my husband on his cell phone and warned him to come in through the garage door entry  because there was no way I wanted the whole swarm in the house. I was already vacuuming up dozens of the bugs from the walls and ceiling.  If it weren't for the fact that they were in my house, I would say they were cute.

But that was only the first plague.

It's so bad that one of my 2-year-old's first words was "stinkbug."  She will now see one, grab some toilet paper, and run to me so I can nab the offending creature. My 5-year-old just grabs them bare-handed and flushes them down the toilet without blinking. I must admit that most days I just cry, "Uncle!" and leave them alone.

And it just plain stinks.
Posted by Jody at 12:16 AM No comments:

Eat Your Heart Out 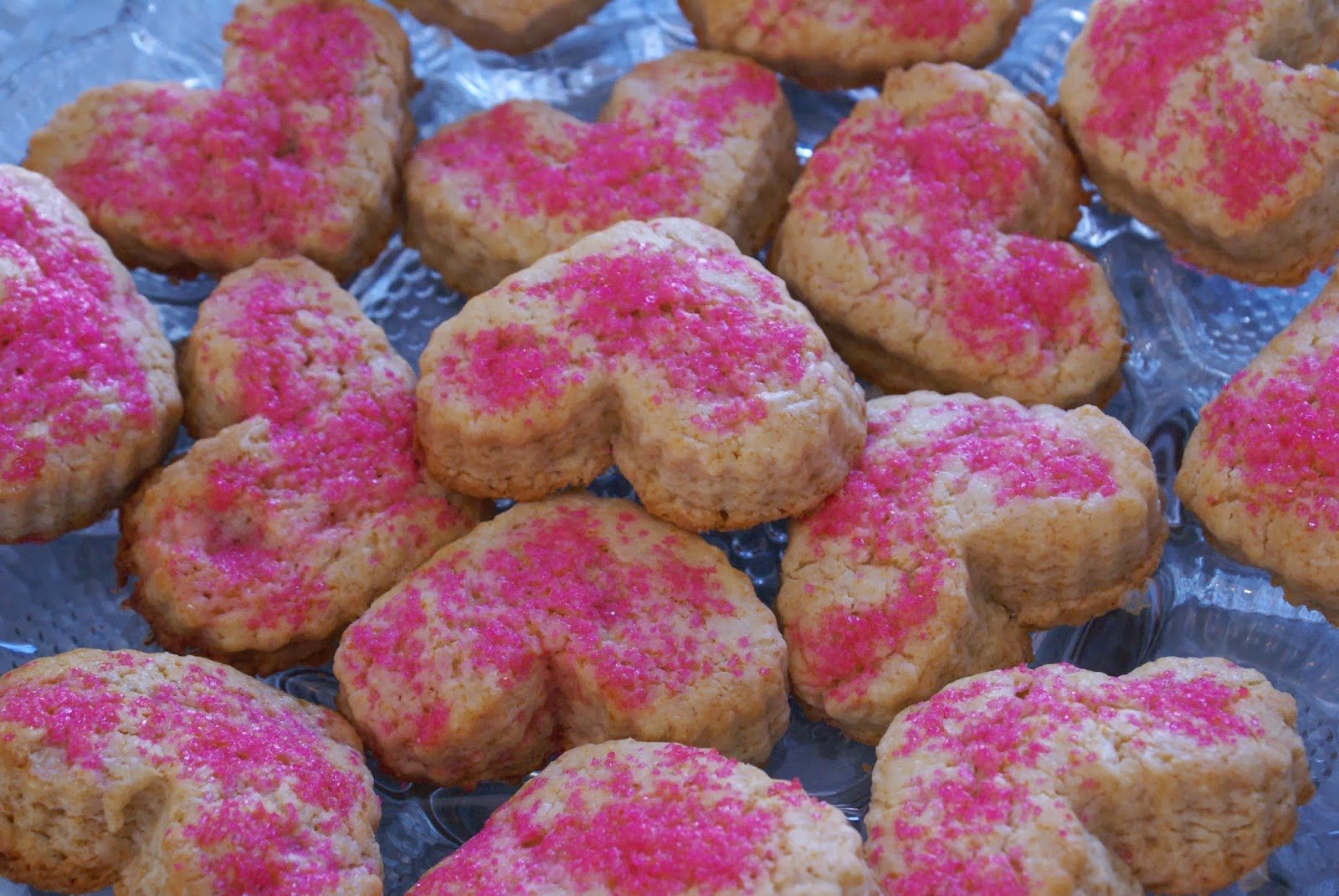 My husband suggested we have a tea party with the children for Valentine's Day. He even found the recipe online for these Ginger Honey Scones.  They were delicious, but the next time I make them, I'll add an extra half teaspoon of ginger so its flavor stands out more.

Also on the V-Day menu were little heart-shaped cucumber sandwiches, little chicken salad sandwiches,  little cranberry tartlets, normal-sized poppyseed cookies, and a grain-free "throw whatever you've got in it" sort of creation rolled in the shape of balls.

My husband, fond of little surprises and warned before the big day NOT to give me a gift under any circumstances because I didn't have one for him, of course presented me with the perfect gift for our celebration--a sampler of decaffeinated teas. That was the reason he suggested the tea part in the first place!
Posted by Jody at 1:13 PM 2 comments:

Email ThisBlogThis!Share to TwitterShare to FacebookShare to Pinterest
Labels: celebrations

The King James Version of the Bible, in many places, has been replaced by versions with more up-to-date language. I think this is great for children and others for whom the older language cause understanding problems. However, the KJV was the Bible of many generations in our English-speaking world, and many great thinkers and writers made reference to it, adding depth to their meaning. Many of the nuances in their writing have been lost to us who no longer hear and memorize from the KJV.

I realized this today in church during the Gospel lesson about the master calling workers into the vineyard. In the English Standard Version of the Bible, Matthew 20:6 reads:

And about the eleventh hour he went out and found others standing. And he said to them, ‘Why do you stand here idle all day?’

In the KJV, it reads (emphasis mine):

And about the eleventh hour he went out, and found others standing idle, and saith unto them, Why stand ye here all the day idle?

That struck me as similar to the children's memory work for history.  They are now learning about the American Revolution, and two of them have chosen the end of Patrick Henry's famous speech (emphasis mine):

It is in vain, sir, to extenuate the matter. Gentlemen may cry, Peace, Peace – but there is no peace. The war is actually begun! The next gale that sweeps from the north will bring to our ears the clash of resounding arms! Our brethren are already in the field! Why stand we here idle? What is it that gentlemen wish? What would they have? Is life so dear, or peace so sweet, as to be purchased at the price of chains and slavery? Forbid it, Almighty God! I know not what course others may take; but as for me, give me liberty or give me death!

Before today, I didn't recognize that as a biblical allusion, but it certainly adds to Patrick Henry's argument.  I wonder just how much goes right over my head because I do not know the King James Version or even enough of any version of the Bible.

It's not just the Bible.  How many other thinkers and writers allude to other greats, and it just whizzes right by the masses because of our ignorance? What a shame.

And while we're on the subject of Patrick Henry's famous speech, did you know that there's a stinkin' good chance he didn't even deliver it the way we know it? Do yourself a favor and google it.

Email ThisBlogThis!Share to TwitterShare to FacebookShare to Pinterest
Labels: history 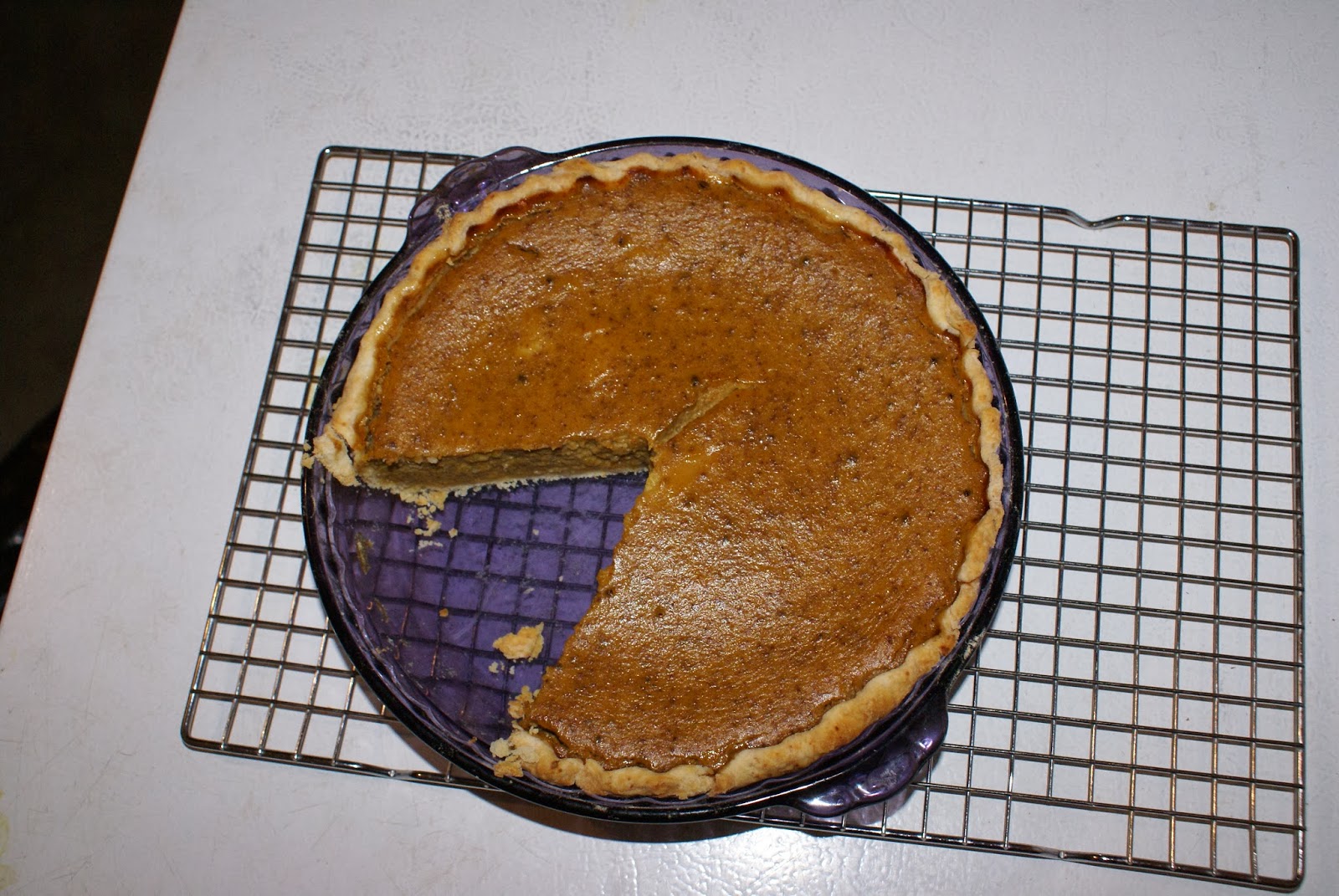 This is the pie I took to potluck at church today. Allow me to clarify: this is what the pie looked like before it went to potluck today.  Yes, that is a large piece missing. You see, sometimes little fingers attached to hungry little bodies simply cannot resist the urge to dig in before the appointed time.

When my husband discovered the pie anomaly, I was livid. I almost cried. That was my perfect pumpkin pie, made with pumpkin from our garden and real lard from butchering! And the crust came out just right!  Do you know how hard that is for me?!

My husband naively suggested that it would be no problem to remove the messed up slice and take the rest of the pie to church. I emphatically responded in the negative. No way was I going to serve up a pie with a slice missing.  It would be so embarrassing!

And after removing myself from the situation and counting to 10, you know what?  I couldn't even think of one sound reason not to take the dumb pie. It would still taste the same without one piece. In fact, most people wouldn't even know it came to church already missing a wedge.

So the piece was removed, the pie went to church, and while I am still cringing a bit on the inside, everything worked out just fine.