The children and I managed to get on the road without incident (at least, almost two months later, I can't remember an incident). Our first high point of the day was seeing the Mississippi River.

Next we met up with the guys in Northfield, Minnesota, at the final worship service at the Higher Things conference. How happy I was to see them in their orange/cantaloupe conference shirts! And, let me tell you, if Lutheran worship is your thing, this service was beautiful.

We said our goodbyes to family and friends who were there and began our grand family vacation. This, indeed was the real beginning of The Big Trip Out West.

We listened to our song of the day and set off to picnic on the Banks of Plum Creek. But, alas, just as it happened in the book, Plum Creek was flooded, and our first exciting stop on TBTOW didn't happen. I was disappointed more than anybody, but who can argue with Mother Nature?

We pressed on to our hotel in Mitchell, South Dakota. The landscape was notably flat.


I have also noted in my travel journal that we saw "cool metal sculptures." My memory fails me, so I don't know where these sculptures were. But perhaps if you're driving on the interstate to Mitchell, South Dakota, you'll be lucky enough to see them, too.

July 5, 2018
Starting point: Defiance, Ohio
Destination: Tomah, Wisconsin
Song of the Day: "I'm Going to Go Back There Someday" by the Muppets

We listened to our song of the day as we pulled out of the driveway at Grandma's house. This day was to be my biggest adventure; my first overnight solo travel with many children. Day 5 was all about the driving. We needed to cover the miles to bridge the gap between us and Daddy. The Big Trip Out West proper wouldn't really begin until we reunited with our family at the close of the Higher Things conference.

My navigator in this adventure was my 2nd oldest son, the 12-year-old. He was in charge of maps and GPS. He was the supplier of toll money. He handed me food and drink. And, most importantly, he was in charge of the tunage.

He also kept me amused. We have an essential oil diffuser clipped to a vent on the dashboard to help the carsick-prone folks not vomit. At one point, my son looks at it and asks, "Can we put Hoppe's #9 in this thing?" Can you guess I live in a house of hunters?

The navigator also had to take some pictures. 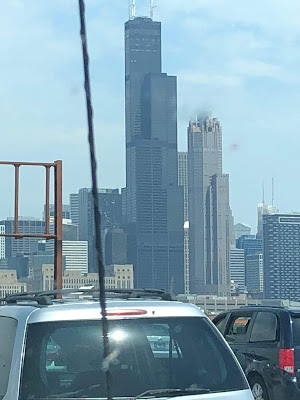 You can see we drove through Chicago. We also enjoyed cool rock formations in Wisconsin.

When we arrived at Cranberry Country Lodge in Tomah, the kids couldn't wait to play in the swimming pool area (it had slides!). However, it was too close to suppertime, and we would be eating out. Denny's was across the street, and somehow I made it through a sit-down dinner at a restaurant with little ones who had mostly been confined to carseats all day.

When we returned to the hotel, we changed clothes and headed to the pool. Folks, it was not fun to take several non-swimming children to a pool without Daddy. It doesn't help that without glasses I can't see very far to supervise the children who can swim (though not super-strongly). Yet I managed. It might not have been pretty, but I survived. I'm thankful I had a couple of bigger kids to help.

We settled in for the night with some over-tired children who missed Daddy and home. During the chaos of getting ready for bed, however, I called to reassure my mother that we made it to our destination safely and learned that Uncle Jim had died that morning. In all the excitement surrounding bedtime, I decided to wait to tell the children until we were with Daddy again.

To be honest, at the end of the day and when all the children were finally asleep, I was proud of myself for managing, but I was terribly sad.

I'm afraid this will be a boring post because I don't have any pictures (at least none without my children) of the time spent at Grandma's house. That doesn't mean we didn't have fun.

Day 2- Sadly, we parted ways with part of our family. My husband, son, youngest brother-in-law, and oldest sister-in-law headed off to Northfield, Minnesota, for the Higher Things conference. Left at Grandma's house, the rest of us decided we needed to party for an uncle's 20th birthday.

Early in the day, Grandpa took the two youngest to the farm store (and I tagged along to buy dog food for Calvin since he'd be staying at their house while we were off gallivanting). The two oldest went with the birthday boy to Walmart.

Evening brought on the party with many of Uncle J.'s friends attending. There were hot dogs over a fire, Kool-Aid, Jell-O cake, and all sorts of other treats. Lots of fun.

Less fun was talking to my mother and hearing that my Uncle Jim (at home on hospice due to pancreatic cancer) was in pain and not eating.

More fun was that at bedtime, Daddy was able to face-time with us. The kids missed him, but they liked the fishy-faces he made.

Day 3- Tuesday was another fun-filled day at Grandma's. The older kids went to the dairy where several uncles work/have worked. My daughter was so excited to see a cow in labor with the calf partially out. She said, "It was both the coolest and grossest thing ever!" In the evening, the girls returned and saw the new calf.

Cousins (and their parents) arrived from Tennessee, and lots of playing commenced. It was another late night.

News from the Higher Things conference trickled in. My dear eldest took full advantage of the cafeteria's offerings and ate cake before his supper AND drank lots of Dr. Pepper. Gee, I thought I taught him about the importance of nutrition. There was also a petting zoo with snakes.

Day 4- Day 4 coincided with the 4th of July. Our day at Grandma's saw the older kids playing cool made-up games with older uncles. All kids enjoyed 101 Dalmations movie in the afternoon. The evening was all about the 4th of July with lots of family over for lots of good food (smoked meat! Aunt Kimmy cupcakes! homemade ice cream!) and fireworks. My littlest was scared of the fireworks, so I missed about half of them.

Unfortunately, the Higher Things crew missed fireworks due to weather. Other less than fun things for me: washing clothes and re-packing. Also, more sad news about Uncle Jim; he continued to go downhill.

Thus ended our stay at Grandma's house; you might say it went out with a bang!

"The Big Trip Out West" Begins

Anyway, TBTOW was to accomplish three things: 1) visit family, 2) see beautiful sights, and 3) include a Higher Things conference for my oldest son and my husband. We thoroughly accomplished each goal.

The trip began after church on July 1st. We'd packed everything the day before, so after church we ate lunch, cleaned up, and left. Our destination for Day 1 was Ohio. Grandma's house. Truly a worthy destination. The kids were so excited; in fact, this was the spot many of them were looking forward to most.

Once we were on the road and said a prayer for safe and fun travel, we listened to the (pre-selected by me) song of the day: "On the Road Again" by Willie Nelson-- always a fun song for a road trip.

Stops along the way were for gas, food (at Walmart), and Cabela's in Wheeling, West Virginia. Energy was high even as the sun went down because we were getting ever closer to Grandma's house.* It was just before midnight when we arrived to a warm welcome. We carried in some luggage, figured out sleeping arrangements, and went to bed.

*You should know that Grandpa lives here, too, and really the children don't prefer Grandma over Grandpa (or vice versa), but for whatever reason, the children call it "Grandma's house."
Posted by Jody at 7:49 AM 1 comment:

Even if you can't tell by my blog, I'm still alive. We took a long vacation in July. I want to chronicle it here, but I'm still processing it and we haven't even loaded onto the computer all of the pictures from the four cameras.

We had a song for each of our traveling days. The one that sums up our trip best is probably the one by Johnny Cash*: 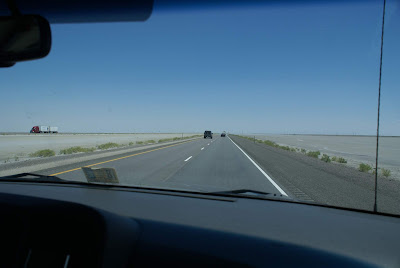 
The highlighted places are the places I know we were in July-- to the best of my memory. We especially enjoyed singing the chorus together as we neared our house at the end of the journey. In the upcoming weeks, I hope to share some of our adventures with you.

*Although we listened to the Johnny Cash version on our iPod, I learned this morning while searching for the lyrics that Hank Snow originally sang this version. BUT this song has a more universal appeal; you should do a quick internet search about it if you're into that sort of thing.

**Glen Rock: I just learned there are many Glen Rock/Glenrock places in the U. S. The one we went through was Glenrock, Wyoming.

***It occurs to me this song might make a fun homeschool geography unit. Hmmm....