After much thought and deliberation, I’ve made a decision that will greatly impact myself and my family. Please know that I have struggled with this and have not entered into it lightly, but for the sake of my health and mental well-being, it must be done. Starting next year, I will boycott the month of July.

The last two years, July has been brutal to me. Last year I was diagnosed with gestational diabetes in July and had to begin a strict diet that did not include homemade vanilla ice cream, all-you-can-eat buttered corn-on-the-cob, or fresh peach pie. The schedule of pricking my finger to test my blood sugar about a zillion times a day would have been easier if I didn’t have the audience of my children fighting over who got to “help.”

Then on the first day of our family camping vacation, we had some difficulty finding a suitable campsite. By the time we had pitched our tents and hiked to the bathroom more times than necessary, it was late, and the kids were begging for sleep. Without having even enjoyed a cozy first night campfire, we fell exhausted into our sleeping bags.

I awoke a few hours later to what felt like labor contractions. Given that I was still only six months along, this was not good. Morning’s first light saw us packing up and heading to the emergency room. After tests, an ambulance ride to Morgantown, and even more tests, my appendix was removed. Some vacation.

This year July picked up right where it left off with a triple whammy. First, I hurt my neck when I greeted one morning with a yawn and a stretch. I went crying to my chiropractor. Next I dropped my end of a wooden beam on my foot and screamed my way to the emergency room. Luckily, it wasn’t broken, but the bad contusion took weeks to heal. While hobbling about the yard and pulling weeds out of the overgrown raspberry patch, I managed to mess up my back, too. I couldn’t even stand up again without using my daughter as a crutch. The ice pack was my frequent companion for the rest of the month.

So that’s why I’m skipping July. It’s just too dangerous. Maybe, just maybe, if the children really butter me up, I’ll take a break from the boycott to celebrate the Fourth, but the rest of the nasty month will be ripped from my calendar. Gone. My poor aching body simply can’t risk another month like it.

My helper through the pain this July was none other than our dear chiropractor, Dr. Rishel. This recipe is from him, one of his favorites for using summer garden veggies. He told me how to make it but didn’t give me specific measurements. I’m approximating how I made it, but I’m sure you can adjust it easily to your family’s size. I also suspect you could throw in other fresh vegetables you might find ready in your garden.

Bring a large pot of salted water to a boil. Add potatoes and boil until almost tender. Next add the onions and zucchini and cook until potatoes are done. Drain the vegetables in a colander. Return vegetables to the pot, and stir in the butter. Add salt and pepper, to taste.

*To be honest, I'm guessing when this was printed. It was sometime in early August.
Posted by Jody at 9:22 PM No comments:

A couple of weeks ago, two of my children's friends came over to play for the day. While the children were content to play, I decided I wanted to have a fancy tea party. As is often the case with me, I dream big, but then reality steps in. Time and baby made it necessary for me to scale back my plans.

So here is what it takes to make a very un-fancy tea party.

First, of course, is the foundation-- a rumpled, from-the-back-of-the-linen-closet tablecloth that doesn't fit our table.  Since it truly was a tea party, ours was herbal iced-tea served in a plastic pitcher and be-Sharpied blue Solo cups. Also notice the mismatched paper plates and napkins in the background. These were leftovers from previous celebrations. Wait. Could that be microwaved hotdogs in the background? 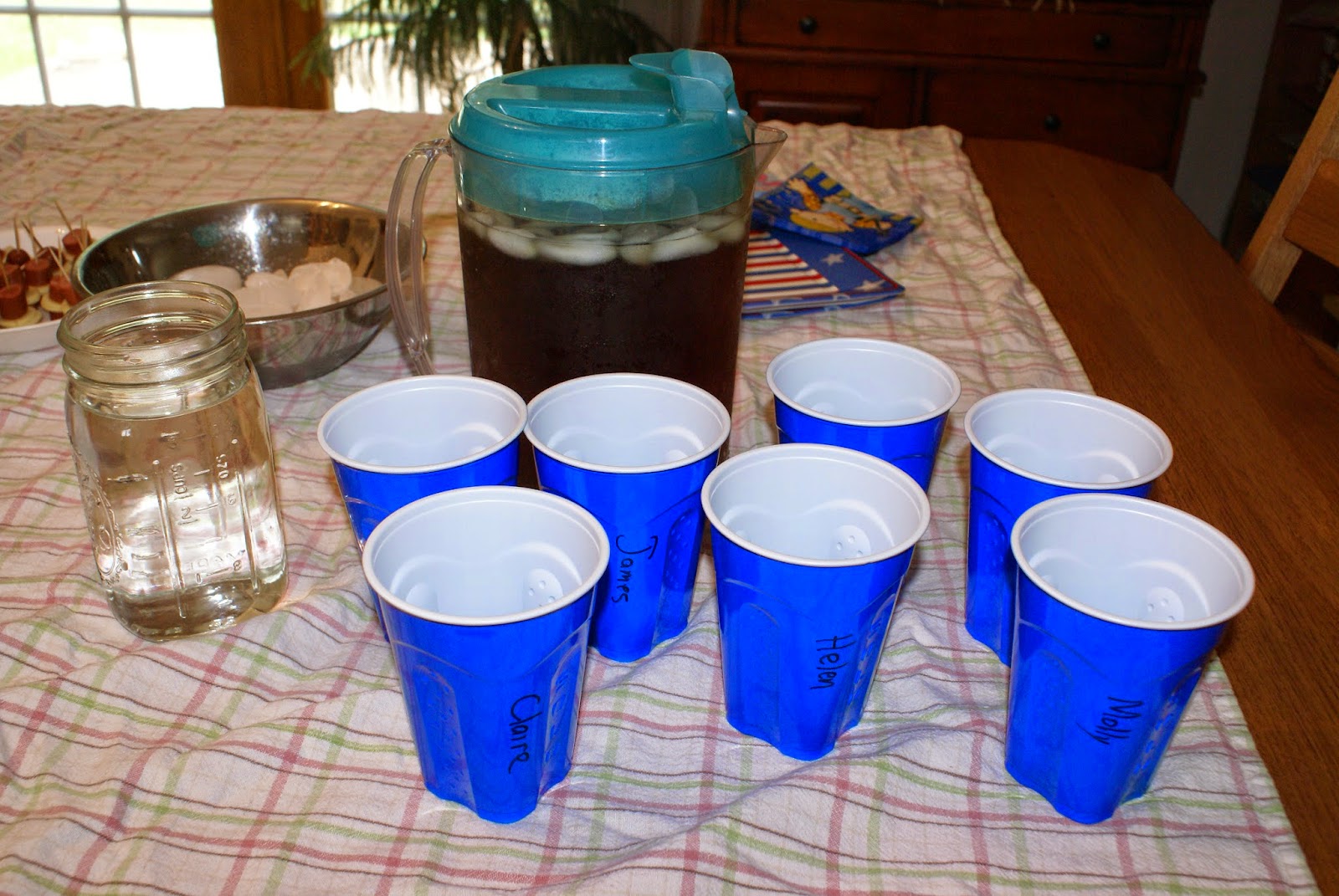 Why, yes, I do think I see toothpicks attempting to make slices of hotdogs and cheese a bit fancier. Those gross-looking things were actually mini-quiches. Well, at least, it's what I imagine mini-quiches to be; I just put some pie crust in muffin tins and baked them up with broccoli, ham, egg, cheese and cream. The boys liked them; the girls not so much. 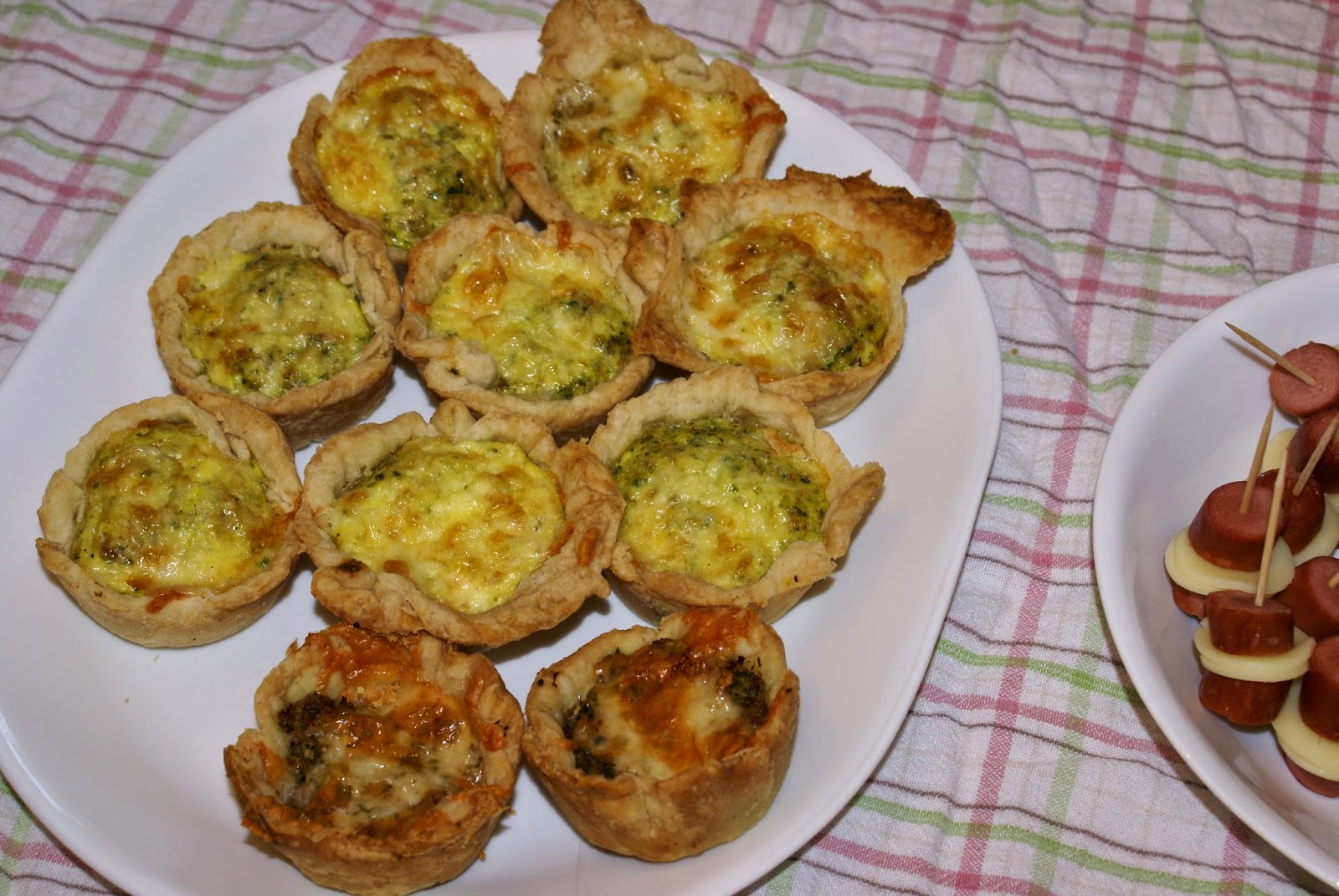 Now the fanciest I got was these little failures of green bean packets. I don't know what got into me. I guess I'd seen something like it on the Food Network before (was is you, Paula Deen?). But I was in too much of a hurry to actually look online to see how to do it right. It was nearly impossible to keep those carrots from breaking, and all the little packets ended up falling apart. At least it was much healthier than hotdogs. 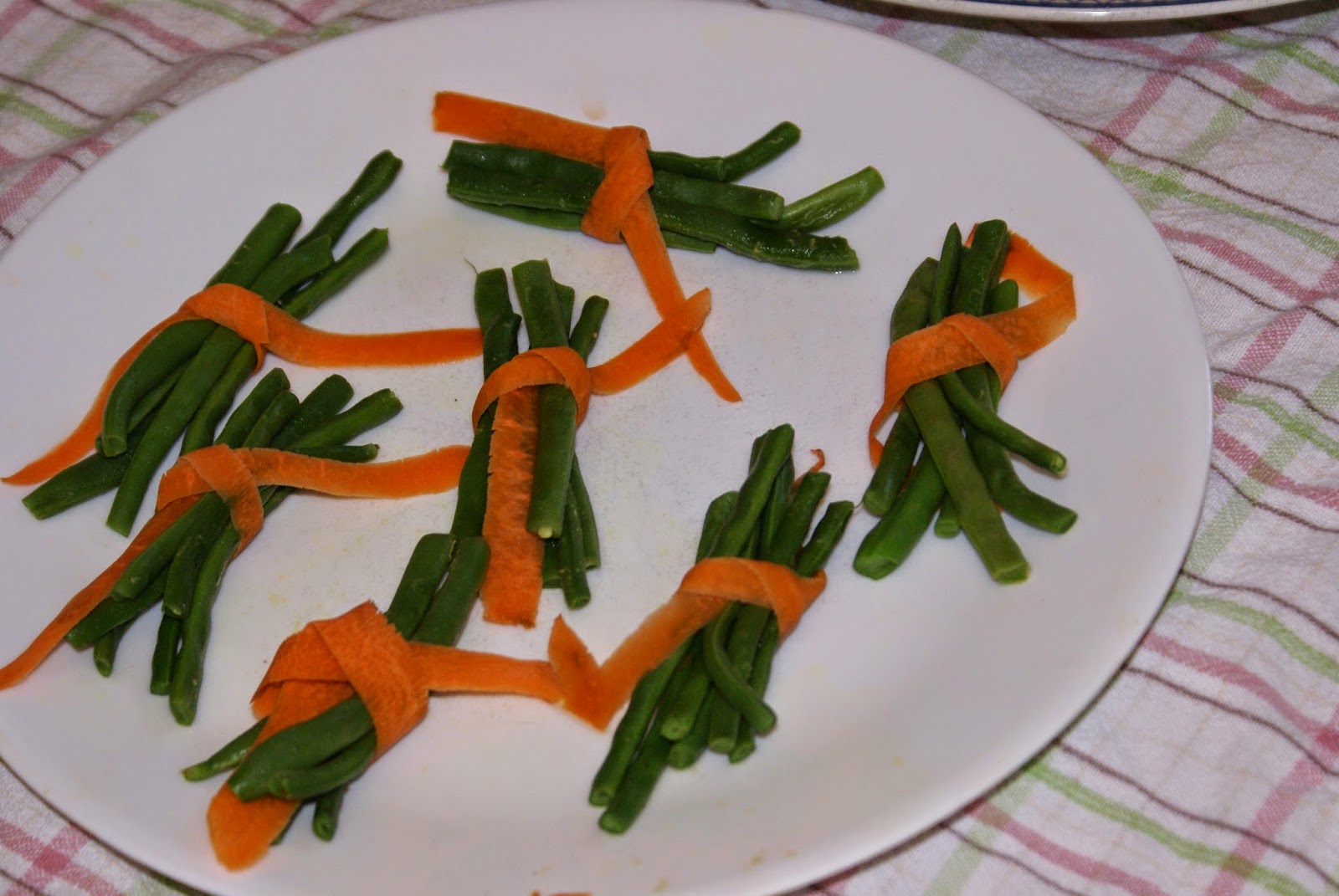 And for dessert we had these yummy peanut butter thumbprint cookies from the C is for Cooking Sesame Street cookbook. I love that cookbook. Plus my son made his zucchini bread with a few added chocolate chips. 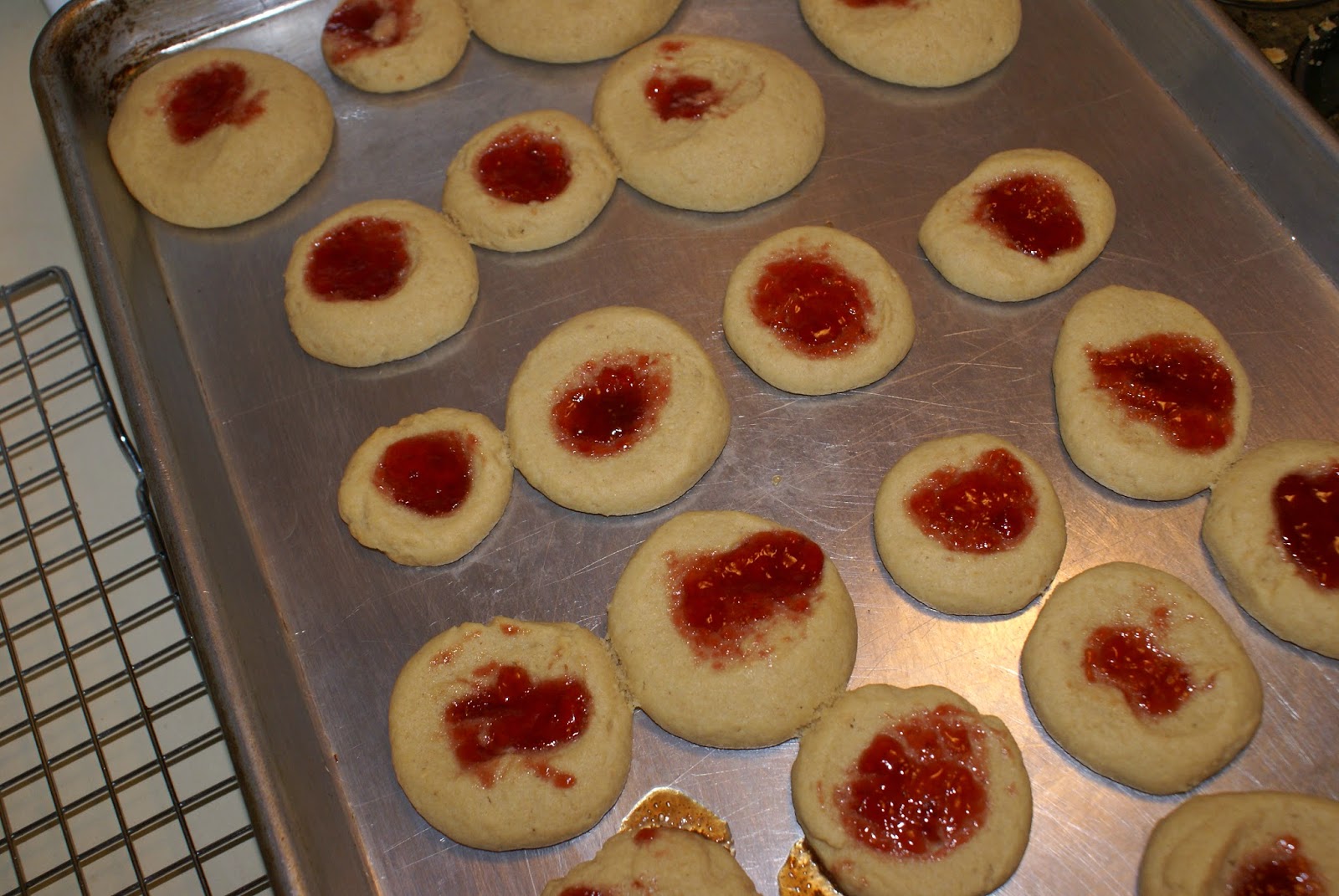 Do I think the children will store up memories of this day as their most treasured? Probably not. But I did enjoy playing around with the food a little bit. And the un-fanciness of it all sure made it easier to pull off.
Posted by Jody at 12:51 AM No comments:

Our dog, Calvin, has his quirks. Ever since he was a puppy, he has insisted on keeping a toy in his mouth most of the time. It’s as if he knows he wouldn’t be able to stop himself from chewing on or licking the people and things he loves. I appreciate that about him because he’s not once chewed on any of the children or their toys, which I cannot say is true in reverse.


Also a habit since puppyhood is his insistence on doing his business only in tall grass or weeds. While this makes it difficult for him when we’re staying in a hotel with a well-groomed parking lot, I certainly can’t complain about it since we have had relatively few instances of pooper-scooper patrol here at home.

One habit of Calvin’s I imagine is not unique at all in dogs is his love of napping. Morning, afternoon, or evening, you can find him sprawled out and snoozing in the middle of the hallway or in his favorite spot at his master’s feet. When it’s really hot, he finds a spot in front of an air conditioner vent.

In these dog days of summer, I feel just like Calvin. During the hottest times of the year, I want to flop down and do a bunch of nothing. Not only do I want to avoid the chore of cooking, but the hot stove makes me miserable. Who wants to make the air conditioner work harder by turning on the oven?

I don’t even feel like eating half the time. Regular food seems so heavy when the heat and humidity are already pressing down on me. Fresh fruits and vegetables are light and appealing, but cleaning, peeling, chopping, slicing, dicing, and dressing is more than my sun-drained brain and body can handle. Of course, we have to eat, so prepare the food we must.

There is one summer delight that is both light, cool, and simple. Yes, it is so easy that even the novice who can’t boil water can make it. You don’t have to turn the stove on or dirty a knife. The only equipment you need is a large glass jar.
It’s sun tea, and while man cannot live on tea alone, sipping a cool glass of iced tea with supper or while sitting on the porch is a gratifying reward for laboring over a hot stove making the food.

The recipe for making sun tea is inexact. You can tailor it to your own tastes. You may use regular tea, herbal tea, or a mix of the two. You can use bagged or loose tea, but make sure if you use loose tea to pour the finished tea through a strainer before drinking it.

Any sweetener you like can be used in whatever amount you prefer. However, unlike brewed iced tea, I’ve never had sun tea have any bitterness which makes it especially suited to needing no sweetener at all.

I've not been on top of things lately. Of course, I rarely am, but I am really late getting a birthday present sent out.

We've been so busy getting these guineas housed. Yesterday, however, since the coop is complete, we went to an auction and scored lots of finds. The most exciting for our family was a lard press since we're trying to acquire all of the equipment for butchering.

I took a fancy to a box containing a bunch of old vintage cards and stationery. A long time ago I found some like them at a yard sale, and I love them. After I'd left with the children, my husband placed the winning bid on the box (which also included a small space heater, a pewter bowl, and an unopened Mother's Day powder jar from Avon).

Well, another thing I'm behind on is sending a card to my in-laws for their 40th wedding anniversary. (I've given up on getting one to my own parents who also celebrated the big 4-0 this year.) Perhaps a picture of it will have to do until the post office brings it to your door, dear ones. 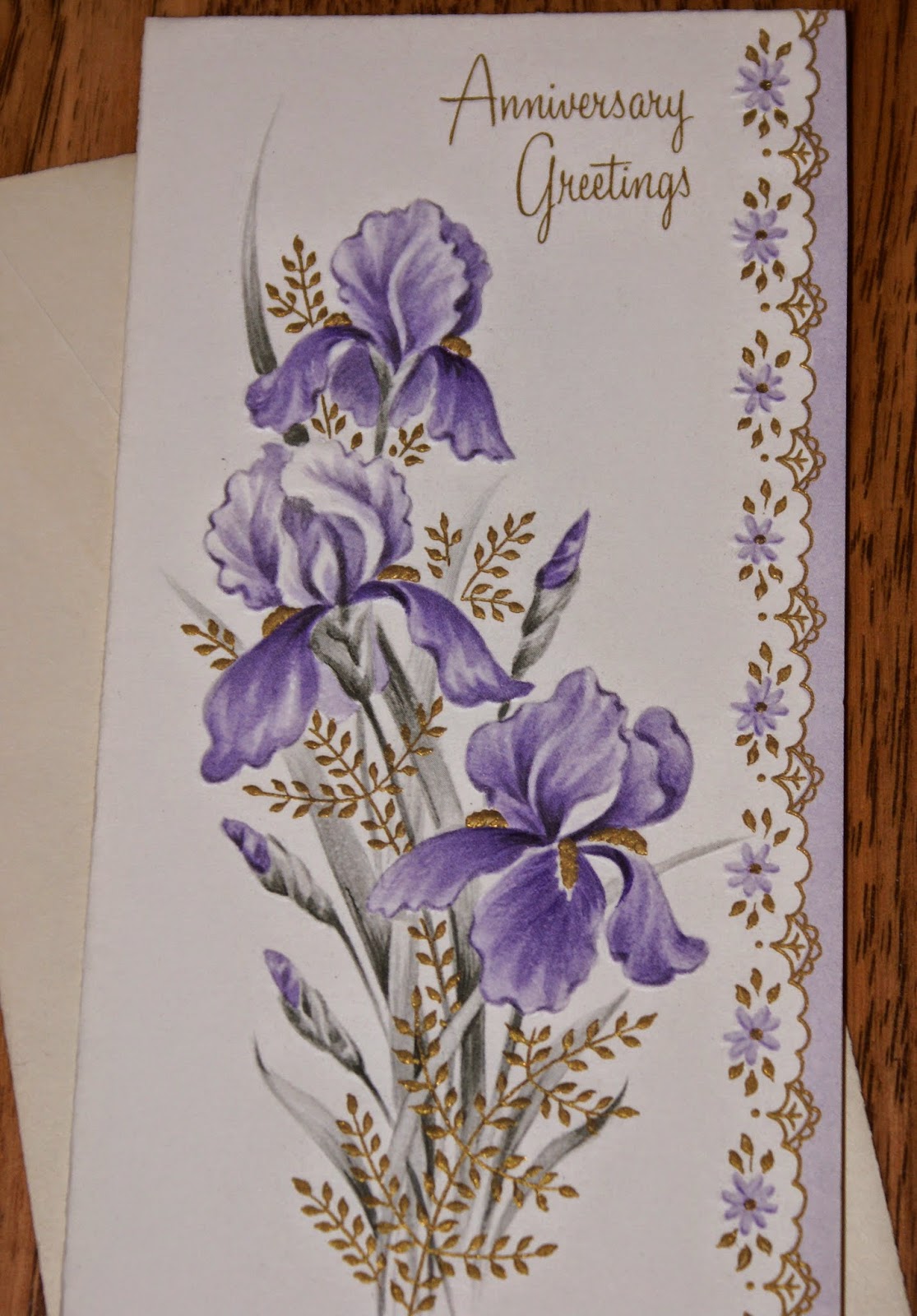 Certainly in this day and age, forty years is nothing to sneeze at and should be celebrated. I hope your special day (weekend, in fact) was delightful. Thanks to both sets of parents for setting a good example for the rest of us.
Posted by Jody at 8:28 PM No comments: