I'm behind on this one, but I always feel a little springy when I see the first robin. Well, that was a couple of weeks ago at my parents' house. Then I saw a few closer to home when we were shopping on Friday. But it was today that the robins flocked in our yard. 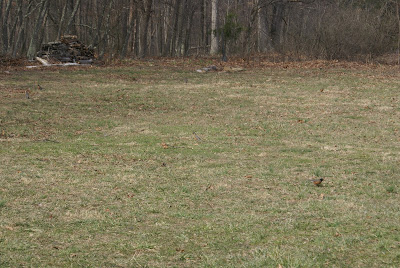 They might be a little hard to see since they're scattered among the brown leaves, but there are at least 5 robins in the picture.

I know yesterday was the first official day of spring, but it's not spring in my mind until the robins arrive. So, welcome, Spring!

Email ThisBlogThis!Share to TwitterShare to FacebookShare to Pinterest
Labels: animals, outside

Tuesday was a good day in our home.

We finally got some snow to enjoy. Our total (before it quit snowing) was somewhere between 8 and 10 inches. Yes, we like to do things properly and exactly around here.

So the kids celebrated Pi Day by playing in the snow in the morning.

We also celebrated Pi Day by having circle waffles. Except they mostly broke apart into fourths. But, hey, we were able to fit them back into circles on our plates. And that counts.

We also ate chowder in bowls which are circles on the top, and the kids' individual pizzas for supper were in a sort of circular shape. Again, I'm not really precise with everything.

But, by far, the very best thing about Pi Day was that we got to see pictures of and hear all about our new niece who was born Monday evening-- all healthy and cute. And that was the exact and precise thing I had prayed for. Well, not exactly. I only prayed for the healthy part; I assumed the cute part.

Email ThisBlogThis!Share to TwitterShare to FacebookShare to Pinterest
Labels: babies, celebrations, outside, thankful

I grew up in West Virginia, and I’m proud of my heritage. But when I was young, once in a while I did feel self-conscious about my home.

For example, when I visited my family on the west coast, I often met new people who, upon hearing I was from West Virginia, immediately looked at my feet. I always assumed they were checking to see if my hillbilly self was wearing shoes.

Maybe I was oversensitive and imagining all of that. But I did not make up my aunts and uncles teasing me about my accent. That was real, and in my travels out-of-state, I met up with many others who commented on my way of talking.

Several years later, my self-consciousness about how I talked caused me to pick Latin in college over the French I’d studied for three years in high school. I figured the professor might not appreciate my French accent with an Appalachian twist. I knew Latin was a dead language, and I wouldn’t be required to converse in it.

So that is why I didn’t learn to speak a second language until recently. Now I am quite fluent in baby talk, and, boy, am I thankful. My sweet little daughter jabbers at lightning speed sometimes. Please allow me to translate for you.

Many of Anna’s words are almost the same or identical to what we say in English-- apple, cracker, cookie, and eat. Perhaps her favorite word is the emphatic, “No!”

“Be-be” is what she calls the baby dolls she drags around. “Na-na,” accompanied by a finger-shake, is what she says accusingly when her brother naughtily steals one of those be-bes away. A heavy panting noise with her tongue hanging out means she’s telling you about Calvin, our dog.

“Pant-pant na-na be-be bonk!” means Calvin is naughty because he whacked her with his tail and caused her to drop a doll and fall down and hit her head.

However, she still lacks the words to say, “I am the queen, and I haven’t invited you to look at or speak to me. Remember my superiority.” When she wants to say something along those lines, she scrunches up her nose and puckers up her mouth in a sassy, exaggerated kissy face; I call it her snooty face. And, because she’s my daughter, I like to imagine she snoots with a little bit of hillbilly West Virginia twang.

In our great United States, lines blur between languages and cultures. That’s why a West Virginian (who was born in California and lives in Maryland) can give you a recipe for Mexican pot roast modified from an African-American cookbook.

The original recipe calls for some flour and for browning the meat up on all sides before roasting it, but I simplified it by throwing it in the crockpot as is. I’ve tried it both ways, and I see no difference. Our favorite way to eat this is to shred the meat, spoon a little of the juices over it, and eat it on tacos, but it’s also good served over rice.

Combine chili powder, paprika, and salt. Rub mixture all over the roast. Then stud each onion with 5 cloves. Put meat, onions, cinnamon sticks and water in a crockpot and cook on low for 6-8 hours until tender. If you have a chance, turn the roast over after a couple of hours.

Serve meat sliced or shredded with some of the juices spooned over the top.

*This post has been shared at Strangers & Pilgrims on Earth for The Art of Home-Making Monday.
Posted by Jody at 7:36 AM 2 comments:

Around here life has been happening. Chores, school, and even some fun.

My eldest one day wanted to make breakfast for me. It was his "food helper" day, and he wanted to make pancakes. This was the "Good Morning Sunshine" pancake he produced for his family.

Back in January I bought a pair of leather black boots for $10 at an outlet. I was pretty excited about the price, but the bonus was that my girls also have black boots. Last year we enjoyed a pink croc date, so the new boot situation seemed to call for a Black Boot Date. And that's what we did after church on Sunday. We went to Buddy Lou's, a new-to-me local restaurant. It was delicious with generous portions. I want to go back often, but I won't because it is a little on the upscale side for around here. But if I had lots of money, I'd willingly spend it because the food was really a step or two above average. The girls' mac and cheese was the best, and it was a kids' meal.


Next was a project on the to-do list for quite some time. The U. S. map that kept falling off the dining room wall because poster putty didn't work needed a solution. After more than half a year, this is our  (cheapest) solution.


We took advantage of nice weather last Friday to get out and hike as far as 3-year-old legs can hike. My husband took us on some beautiful country roads up into Pennsylvania to a pretty place. I honestly can't remember for sure the name of the location. . . Buchanan State Forest? Dickey's Mountain area? The map said this:

The kids liked crossing over Cove Creek on a bridge. There was lots of fishing happening. We even heard spring peepers. In February.

With mostly flat terrain, we didn't really see much other than some wet spots, the creek, vines, and trees. I did hear something scurry off into the underbrush, but I didn't catch a glimpse.

Incidentally, we also learned that the baby also gets carsick on twisting roads. And she won't wear the SeaBands yet. Yay! If you're keeping count, that means four out of seven kids get carsick to some degree.

And we had a fat, fat Tuesday this week. Homemade apple fritters, doughnuts, and bacon for supper. Afterwards, I felt fat.

I can't imagine why.