Back before Christmas my husband came home for lunch one day and said something cryptic. He said, "I'm going to tell you something, and I don't want you to say anything."

Of course, I was curious and worried. I replied, "How long till I can say something?" He told me he just wanted me to listen and not say "no" right away.

He told me that Loretta Lynn and Crystal Gayle were scheduled to sing at the Grand Ole Opry in January at the old Ryman Auditorium. He continued that it was more than we spend normally, but we'd never taken the kids to something like it and we wouldn't often have the chance to see such a legend, etc.

I immediately said, "Yes! Go buy the tickets!" That afternoon I called and bought tickets. I proceeded to worry that sickness or winter weather would ruin the whole thing.

Then this past weekend, we went to Tennessee. We were able to visit and stay with our beautiful niece and nephew (and their parents) since they live outside of Nashville. The weather was great, and the kids had lots of fun playing outside.

But on Saturday morning, we woke up with one sick little boy. We started wondering which of us would stay behind and which would drive into Nashville with the others. By afternoon, sick little boy wasn't too terribly sick, so we decided to chance taking him along anyway.

The drive in was easy. We found parking for our van easily. We walked to the Ryman Auditorium. Everything was going well.

Then it got even better. We found out Crystal Gayle was actually being inducted into the Grand Ole Opry that night!

When we went inside and sat down, this was what we saw:


Then it got even better when the music started. I loved the format of the show with so many different performers. We all enjoyed it. Except when the little one felt sick. Except when a bigger one got a bad headache. But even then it was an amazing show.

I think the kids' favorite was Riders in the Sky. They were funny!

My favorite, before and after the show, was Loretta Lynn. At age 84, she can still sing. The headache boy thought it was nice that she sang one of her songs that he "kind of" likes-- "Fist City." (This is the boy who loves Metallica, so Loretta Lynn is a little bit of a stretch for him. Crystal Gayle is a bigger stretch.)

I've never been to the newer home of the Grand Ole Opry, but I definitely recommend going to the Ryman to take in a performance; the Opry plays there in the winter some. If I lived closer, I can see myself saving up money over and over to go to the Grand Ole Opry.

Afterwards, we took in some lights and sights as we drove out of town. 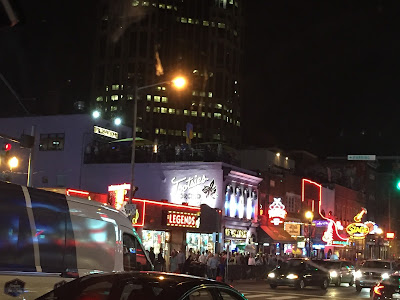 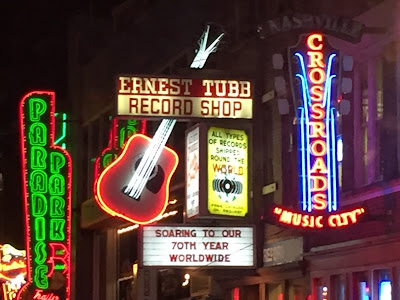 It might be a bit premature seeing that January isn't even over yet, but I think I can say this is the highlight of my whole year!

It might seem I'm a little obsessed with my muffin pan, but I received a second one for Christmas. If you haven't been privy to my previous posts about my amazing muffin pans and you want to see more muffin pan action shots, look here and here.

If you don't want to look at the other posts, here is a picture of my new USA muffin pan in action.


The interesting and different thing about this muffin tumbling picture is that when my mother-in-law was here, she asked if we had to grease them. We always had greased them some, so she suggested a scientific experiment to see if they need greased. The next time muffins were on the menu, my daughter and I carried out the experiment, leaving one row in each muffin pan un-greased. And as you can see above, the results were identical-- clean muffin tins with no scrubbing necessary. Simply beautiful.

Now. Another experiment. Same brand. Different pan. This time it was the lasagna pan's turn. I'd made lasagna one night and reheated it the next for supper. You can see the burnt mess.

I wondered if these remarkable pans could ace even this horrible mess. After using my plastic utensil (no metal on these silicon-coated pans!) to scrape gently, the pan looked like this:


Then the pan went into the dish water, and after a quick swipe with a dish rag, the results made me happy.

So, in summary, these USA pans are awesome. They are a little more expensive, but if you don't like things to stick and you don't like to scrub pans, they are worth it. Also, unless somebody shows me something otherwise, I'll continue thinking they are not so chemically bad for the body as other non-sticks. And, remember, because I have an audience of, on average, 10 people, nobody's paying me to say it.

Email ThisBlogThis!Share to TwitterShare to FacebookShare to Pinterest
Labels: I recommend, pretty things

I’m a crybaby. While I don’t cry as easily or as often as I used to, every once in a while, those tears just have to fall.

For Christmas we received the Stottlemyer calendar that Aunt Patty makes. The yearly gift has the birthdays, anniversaries, and current pictures of everybody in my husband’s large family. As I eagerly flipped through the months, I noticed that our wedding anniversary looked awfully lonely by itself on that square in August. You see, we were married on Grandpa Bill’s birthday. I was overwhelmed by sudden grief, remembering Grandpa’s passing, and I cried.

Then on Saturday I fought back the tears again, but for an entirely different reason. Our large van isn’t the easiest of our vehicles for me to drive, and let’s just say it prefers dry, paved roads to icy and muddy dirt driveways. For the second year in a row, I managed to get the van hung up in our friends’ driveway for butchering day.

There I was, trying to rock the van back and forth just enough to gain some traction, and all the while I had an audience. I was stressed out, to say the least, and I soon admitted defeat, leaving the van mess for my husband to deal with while I, with my tail between my legs, retreated inside so I wouldn’t have to watch. If my audience hadn’t been kind friends, I’m pretty sure the tears that threatened would have spilled over, and it’s possible I might have died from embarrassment.

And sometimes I cry because of the beauty of it all. That happened this morning at church. I watched as my husband baptized a precious baby. I watched that baby and her family, I held my own squirming and Cheez-It-covered little ones, and I simply couldn’t hold all the happy inside. All the beauty and promise in life spilled right out as tears.

And that’s the kind of crying I like to do. In this new year, may all your tears, or at least most of them, be those joyful tears born of delight and wonder and pure happiness.

At the hog-butchering this year, as usual, pies took center stage (that is, after the contents of the puddin’ pot). I would say my favorite was the raisin pie; this year my friend didn’t realize until too late that she had golden raisins instead of the regular kind, but that pie did not suffer. If anything, it was even better!

I stayed up the night before baking cherry pie, pumpkin pie, and because I had some extra crust and no fruit thawed out, this Bob Andy pie. I think I got the recipe online a few years ago, but I have no idea what’s behind the name. It’s a simple pie filling that’s easy to make, and the best part is that you’ll most likely have all the ingredients on hand.

Adjust oven rack to lowest position and heat oven to 325℉. Crack eggs in a medium bowl and whisk. Whisk in milk. Add sugar, flour, cinnamon and salt and whisk into milk mixture.


Pour filling into unbaked pie shell. Bake until custard has set and crust is golden, about 50 minutes. Remove from oven, cool and serve at room temperature or chilled.
Posted by Jody at 8:03 AM 2 comments:

There are a few stray pictures from Christmas, and since Christmas is now over, it's time.

Since I love Frugal Girl's contest, here are a couple pictures of ours (no contest).

And my favorite gift, a set of hand warmers (for when my hands are freezing in bed).

And this morning, we have our first snow! I guess it was waiting for Christmas to be over. The kids are hoping for a day off school. It's not going to happen, but maybe there'll be an extended recess.