Ever since I was a teenager, I've wanted to dye Easter eggs with natural dyes, with foods and such from the pantry. This was finally the year. Although I faced opposition from some children, they eventually got on board when I assured them that it was only for this year, that it would be a fun experiment. I also showed them tons of cool pictures on Pinterest.

These are the results. 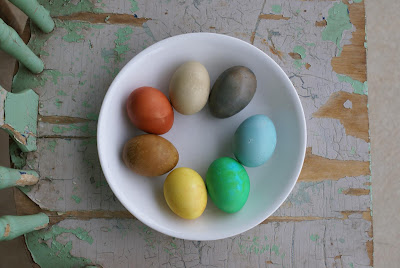 I was quite pleased with the results. I'm not sure I'd get the exact results again because I used a few different methods and didn't measure the time or the ingredients.

I used, starting at yellow and going clockwise, turmeric (yellow), coffee (brown), onion skins (rust), beets (tan on the outside, light pink on the inside), purplish gray (blueberries), and purple cabbage (oh-so-pretty blue!).

The epic fail was green; I used spinach, green tea, and nettle which produced an almost totally white egg. My son, who was in charge of the green, made the executive decision to dump a good bit of green liquid food dye in because he wanted green. I agreed because there was just nothing appealing about that non-green egg.

The other experiment of the year was trying to get the imprint of flowers on the eggs by using pantyhose/tights and rubber bands to hold a flower down while in the dye bath. The results were mediocre (at best), but we think the little girls' tights were too tightly woven. However, the neat egg effect you can see below was produced where the tights were twisted and rubber-banded on the opposite side of the egg from the flower. It was a fun discovery in our little experiment. 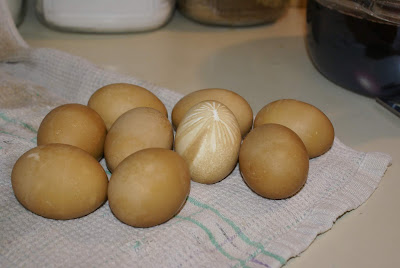 If I were to do this again, what would I do differently? Well, I am wondering if the eggs in the beet dye were in the bath too long because they were light pink for a while. Same goes for the blueberry one; however, it was a deep, dark purple when it originally came out of the bath and changed later. I would completely avoid attempting green.

Which were my favorites? That's easy. I loved the colors that resulted from the purple cabbage, the onion skins, the turmeric, and the coffee.

Have you ever experimented with Easter egg dyes?

He is risen! Alleluia!

Why do you seek the living among the dead? Alleluia! 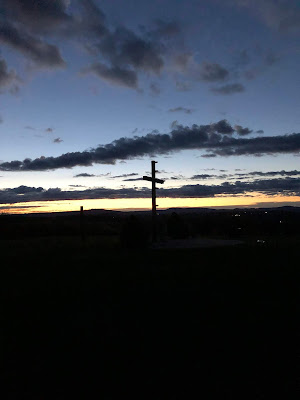 Email ThisBlogThis!Share to TwitterShare to FacebookShare to Pinterest
Labels: church

"And as Moses lifted up the serpent in the wilderness, so must the Son of Man be lifted up, that whoever believes in him may have eternal life."
~John 3:14-15 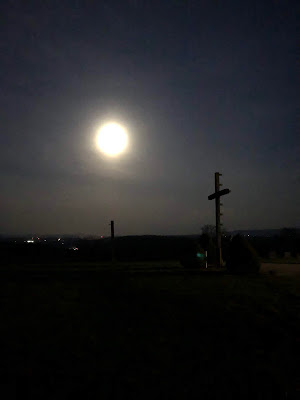 **This picture that my husband took as we walked home from church last night seems perfect for today.
Posted by Jody at 7:00 AM No comments:

This is the story of the Three Little Pigs, as told by my 3-year-old daughter to me this morning:

"Once upon a time there were three little pigs and them built houses. Amen."

I suppose brevity is the soul of wit.
Posted by Jody at 7:44 AM No comments:

I've been blogging quite haphazardly (at best), but today our friend was admitted to the hospital. I began thinking about my mother's hospitalization around New Year's, and I remembered a picture I took at the hospital.

One of my mother's nurses wore a uniform unlike any nurse I've seen for a very long time (if ever). 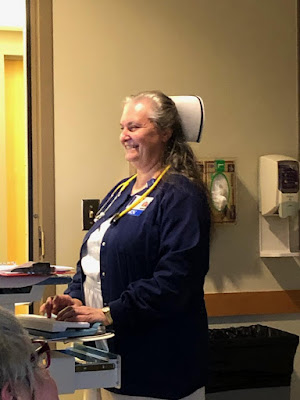 I was so surprised to see the traditional nurse uniform, and she said she gets that all the time. I asked for permission to take a picture, and she said that was fine. She also told me the story about why she wears it: her mother put her through nursing school and wanted to see her in her nurse's hat. She wears it out of respect for her mother.

I have to tell you, I wish it were more common. There was something authoritative and reassuring about her uniform. It just seemed right and not quite so "pajama-y" as the scrub-style uniforms worn by most modern healthcare professionals.

Has anybody else seen a nurse dressed like this anytime in the last 30 years?

** By the way, if you comment and I do not reply, it's not because I don't want to. I've been unable to comment on my own blog for the last several weeks, and I'm not sure why. I haven't had the time to figure it out. If anybody knows what I can do, please send me a note!
Posted by Jody at 9:17 PM 2 comments: