A while back my husband and I instructed the boys to wash the supper dishes while we took a walk to get the mail. As we neared home again, we were greeted by the boys marching around the driveway carrying these signs attached to rulers: 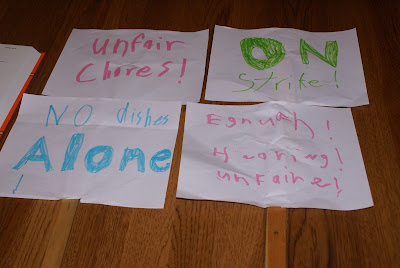 Evidently they felt their little sister and parents should have to help with the dishes, too.

I was amused, but I was not amused enough to excuse them from having to do the dishes.

In college, one of my roommates made up games. These games weren’t like your regular board or card games. Instead she’d challenge herself to games I call “How Long Can I?” games. Once she decided to stop eating to see how long it was until she felt truly hungry. Another time she wondered how long she could go without showering before she couldn’t handle her own stink. I don’t recall how long she held out, but I think she showered sooner than she ate.

Some of my roomie’s spirit must have rubbed off on me because for the last several years I’ve challenged myself to what I call the Heat Game. The rules of the Heat Game are easy:  when the leaves fall and the mornings are crisp, don’t turn on the heat.

I’m not trying to save money or even the environment by using less fuel oil. What I am trying to do is beat my record from two years ago-- November 23rd.

My husband and kids are good sports and play along with me. When the mercury drops, the kids lug pumpkins upstairs from the basement where we’ve stored them. My husband wields our biggest knife to cut open the pumpkins. Then we scrape out the seeds, and the pumpkins go into a hot oven to cook. That heat makes all the difference; a steady stream of roasting pumpkins helps warm the house. Baking bread, pies, or pizza is a good choice if you don’t have a few dozen pumpkins in your basement.

When the heat from the oven isn’t enough, we pull out the flannel sheets and my favorite blanket which I have not-so-creatively named “Mr. Woolly.” Socks, slippers, and throw blankets become mainstays in the house. Hot tea with spicy flavors of fall become the beverage of choice. Despite a little chill in the air, my Heat Game time is a cozy time.

But eventually all this coziness comes to an end. One night last week I’d just turned off the oven after pulling out two loaves of pumpkin bread, and I noticed the air was still chilly. Worse yet, my nose was cold. I can layer socks and blankets on all other body parts, but I’ve yet to find a cure for a cold nose that doesn’t involve turning on the heat.

So at 11 p. m., on November 10, I turned on the furnace; my Heat Game 2017 ended. The next morning my daughter reported that frost was on the ground and the guinea’s water had frozen over. It would seem I lost the game right on time. I may not have set a personal record, but I’m still happy because my nose is warm and there’s always next year. 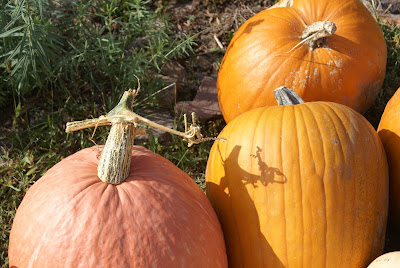 We harvested more than 50 pumpkins and winter squash from our garden this year, so I’ve been looking for new pumpkin recipes. In the past I’ve been unhappy with pumpkin bread recipes I’ve tried because they seemed way too sweet to my taste. I searched the internet and came up with this alternative which uses only honey and maple syrup.

While I might increase the spices next time, this is the pumpkin bread recipe I was looking for-- a bread I won’t feel so guilty feeding my kids for breakfast. I was also surprised by how soft and moist it was.

In a different bowl, combine all dry ingredients. Stir the dry ingredients into the wet mixture just until everything is incorporated. Divide the batter between the two loaf pans, and bake for 50-65 minutes or until a toothpick comes out clean. Cool pans for 10 minutes before turning bread out onto wire rack to cool.

*This column was printed in the November 22, 2017, issue of the Hancock News.

I was at the computer last week when I happened to look behind me. 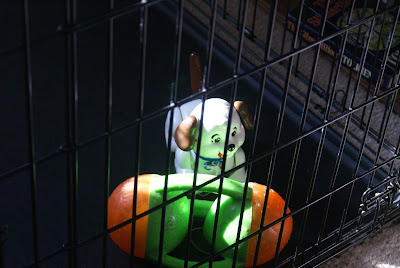 My littlest had put the toy doggy in Calvin's kennel. She was so sweet to include a doggy toy. She was also "reading" to her dog from all of her beloved Pookie books (Sandra Boynton).

This is now a regular part of her play. Several times I've had to let the dear puppy out of the kennel because Calvin wanted in.

And if you want to buy some fun board books for a toddler, go with the ones by Sandra Boynton. Our little ones have all loved them.

I have another addition update. This entire project is nearing the final weeks, and I'm starting to worry a bit about the chaos of moving everything around while the new flooring (in both the addition and the rest of the house) is installed. When I worry, I just remind myself that it will all be over soon, and I will love it!

The last couple of weeks have seen paint and trim and a plastic wall. And lights and ceiling fans (but you won't see that in this post).


And now we have an echo-type situation with all that emptiness in the addition. When we speak in the house, our voices come back to us. The first few days the little ones stood at the plastic shouting and having fun with the sound effects.

I'll try to remember to get some more pictures today because the ceiling fans are so purty!

I have a backlog of blogging ideas, but instead I'll share with you a rare morning rainbow that we enjoyed briefly today. It was brighter and bigger, but by the time I grabbed the camera, it had faded.

Email ThisBlogThis!Share to TwitterShare to FacebookShare to Pinterest
Labels: outside, pretty things

This year was an epic fail at beating any records in my little game I like to call "Wait as Long as Possible to Turn on the Heat." This week temperatures really dropped outside, so I've been baking my pumpkins and other good things all week long. All those activities kept things warm enough for awhile.

Last night I baked pumpkin bread for breakfast this morning. Even with the oven on, my nose was cold. I can put layers and layers of clothes on. I can pile blankets on. I can put foot warmers under the covers. But I can't cover up my cold nose. I just can't.

I considered waiting until midnight to stretch out the inevitable, but I was too tired to stay up that late. So 2017's official Heat Day is November 10th-- the earliest yet.

And just in time. My daughter informed me this morning that we had our first frost and the guinea's water was frozen over. It is, indeed, time for the heat.

Email ThisBlogThis!Share to TwitterShare to FacebookShare to Pinterest
Labels: managing, outside

Quote of the Day

These are words spoken by my son over a grammar lesson. Don't even ask.
Posted by Jody at 11:25 AM No comments:

Sorry, folks. I've lost count of days. Between school and a recent bout of sickness, I just don't have the motivation to figure it out right now. But I do have pictures of what's happened this last month or so.

Other notable changes-- the heaters are in and working to keep the proper temperature for paint drying. The trim and interior doors were delivered. We've picked out the flooring, and it's scheduled to be installed the first week of December.

Folks, these are exciting times-- even if I'm not posting about it as often.