And Then There Were None

A little over a week ago, it was my turn to take our dog out first thing in the morning. This is the sight that greeted me. 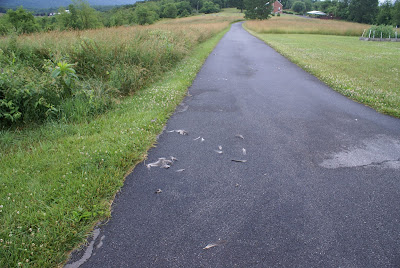 In case you can't tell what that is, here's a closer look: 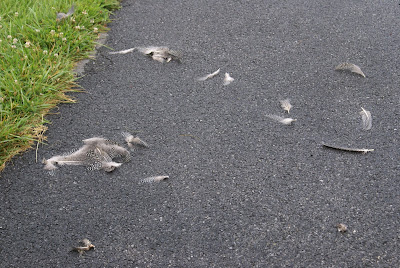 Yep, those are feathers. Lots of feathers. Guinea feathers, to be exact. I knew something was very wrong in guinea paradise.

Upon further inspection, my son and I confirmed my suspicions-- the remaining two guineas had been brutally murdered by some nocturnal beast. I guess, technically, we could be wrong as we never found the bodies (only a few small chunks attached to feathers), but really, what nocturnal beast that drags guineas through a smallish hole in chicken wire would leave the bodies around as evidence? 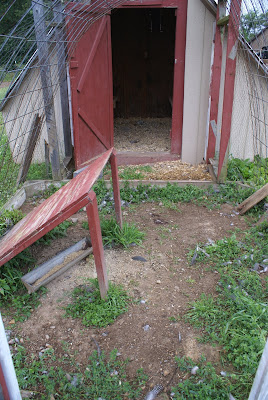 As violent as this was, it wasn't heartbreaking to our family because these only two who were left were male and driving us crazy by fighting with each other.

I guess that's the end of our first fowl experiment. We liked the eggs. We did see a decrease in ticks on our bodies; no Lyme disease while we had the guineas. My favorite thing about the guineas was just watching them; they are so funny!

The downsides to guineas? Well, when we wanted to vacation or visit family for a few days, we had to find somebody who was willing to take care of them. Also, they were not good for our garden; they either dusted and killed plants or ate my greens. We also didn't care for the meanness; they weren't mean to us, they were mean to each other.

In the end, we do plan on getting more fowl-- but not until spring probably. We all want different birds-- guineas, chickens, and ducks. I guess you'll have to tune in next spring to see what we settle on.

But no more guinea feathers for etsy!! Lots of love~Sarah

Well, we do have a few in the freezer waiting for me to photograph :)